WHEN WE ARE NOT - EP

Melissa has always had a deep love for all kinds of music. As a child in Tennessee she grew up listening to country artists like Wynonna Judd and Dolly Parton, along with The Allman Brothers and the Beatles.  Later on in the suburbs of Detroit, she would spend hours in the park under the big maple trees with headphones on, singing along and lost in the music of artists like Radiohead, 10,000 Maniacs, Billy Joel, Michael Jackson, Indigo Girls, The Police, Stevie Wonder, Lauryn Hill, Jeff Buckley, Tori Amos,  Whitney Houston...and whatever else she could get her little hands on! She began singing in choirs when she was 11 years old - everything from show tunes to jazz to madrigals.

When she was 18 years old a friend gifted her an acoustic guitar and she started writing and performing songs. She went to college in Ypsilanti, MI, but soon dropped out to follow her passion for both music and questioning the establishment. There, she formed a band with a few musicians at the local coffee shop "The Mudd House" and started performing regularly.

IN 2002, Melissa moved her band to Seattle. Her style was  influenced by the moody, edgy grit of the city and she started playing electric guitar. With her band "Seeing Blind" she recorded studio albums with producers such as Jack Endino (nirvana, screaming trees) and Jonathon Plum (Blind Melon, Brandi Carlile), played at many festivals including Seattle Pridefest and SXSW, and shared the stage with artists such as Brandi Carlile and Kathryn Calder (New Pornographers).

In 2014, Melissa had the opportunity to participate in full time meditation practices, so she took a hiatus for 5 years. When she was finished in 2019 she moved to the San Francisco Bay Area and was just getting ready to start performing again...when COVID hit! By this time though, Melissa had honed just the sort of skills needed for a lock-down from all her years of meditation practices! She took that time to cook up some fresh new songs.

Melissa considers herself a songwriter first and foremost and so doesn't feel obligated to fit into any one box or genre. She allows herself to constantly explore and rediscover herself through many different influences and flows of inspiration. Like Roy Rogers sings "Don't fence me in"! 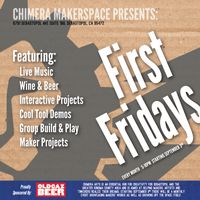 Wine and beer, cool live demos of the all of the tools, interactive projects, makers projects and more.